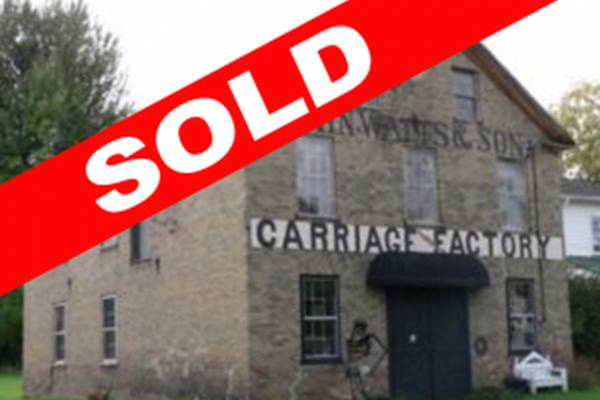 REAL ESTATE AUCTION
to be held on site
@ 88 Main St., Easton’s Corners, ON

This c1850’s property features a glimpse into the past, when carriage works lined the Rideau Corridor. It is now the only physically remaining carriage works structure in the district. Appears to be a structurally sound, 2 storie building. Some restoration has been done. Enterprising developers should swoop up & juxtapose old & new for a spectacular residence. Having an historic facade w/ exposed brick walls, beams, wood floors & giant windows, all that hint at the building’s past. Alternatively a clever storage facility. Dug well. Electrical services at road. No septic. Lot size 50 ft frontage x 160 ft depth (+/-). “Hamlet” Zone permitting a mix of commercial and residential uses.. Taxes; $ 1750.00 (+/-). This property will be sold w/ a very reasonable reserve bid. For private viewing, terms & conditions please call our office @ 613-267-6027.

The Need for Carriage Factories – Carriages built in these factories were necessary to fill the need for horse drawn buggies that were being used for moving freight goods, delivering mail, visiting neighbours, picking up supplies, and dating. By 1840, carriages had become an integral part of everyday life in the pioneering community. The carriage not only supported trade in the area, but also the growth of “carriage works”, as it was called, which included foundry and wood processing industries. As these trades were already alive and well in Merrickville-Wolford, carriage-making was a natural next step. Throughout the late 19th and early 20th century, horse-drawn carriages reigned supreme and became a source of family pride, much like cars today.

There are only a few properties that are a part of the rich carriage-making history of the area. The John Watts and Sons Carriage Factory in Eastons Corners is one of them.

The carriage factory in Eastons Corners was started by Robert G. Eastman in the 1850s. When he moved to Merrickville to start up another carriage-making business, the factory was taken over by John Watts and Sons, who continued to operate into the 20th century. Most recently, the building was restored and made into an antique shop. It is now the only surviving reminder of the carriage industry in the area.